I really enjoy listening to older shows. It’s a habit I picked up while listening to the Grateful Dead on relisten, an app that lists past shows on that date on the front page for each artist. I really enjoy going through the archive and listening to dead shows and reading the stories and the reviews of different shows. I want to bring a bit of that to the Bort by talking about the shows on today’s date, whether that be talking about particularly interesting improv, funny banter, or unique occurrences. I also want to leave it open to let people share their experiences at shows. Those were my favorite part of past setlist threads that we lost with Bort 3.0. I kicked it off today by listening to the shows that were played today (none of which I had attended).

Each show was a one setter, either as part of a festival or a split bill.

Aside from the novelty of it being UM’s only show in Japan to date and Ryan speaking Japanese, nothing stuck out to me on my relisten to the Fuji Rock Festival.

My highlight of the show at HOB - Myrtle Beach was the series: Utopian Fir > Much Obliged The band dropped into its typical dub jam in the second half of Utopian, but it was slower and spacier. It sorta reminded me of a restrained Scientist dub track. They followed up with a jam in Much Obliged that drops into a real ear worm of a beat with Stasik really shining around the 6:30 mark and onward.

I think my favorite show of the the three is the 2010 show though, because it just had tremendous energy. The jam in tribute is great and the transition into Andy’s Last beer is really smooth. As I was listening on my bike ride home, the improv in Mulches left me thinking it was really beautiful. There was also a dub Wife Soup, which I had never encountered before. Does any one know how rare this sub version is? I could go through and click on all 200+ Wife Soup on the all things, but I figured I would ask here first.

Any one listen to these shows today or recently? Any one else interested in participating in this? I probably won’t post every day, but will try to keep up with it overtime. I would be glad to have others participate.

Everyone is familiar with the Dump City, but the opening SF1 and the 19 minute Search 4 (in only its 2nd ever play) are also worth a listen. Great show, hard to believe it was 12 years ago already.

That show was so f’n great. August is a f’n beast. I wish the SBDs didn’t have those little drop outs, but still a great listen.

My (awful person of an) ex GF at the time was 25+ shows deep & hadn’t seen August yet, so it was even more profound when they opened with that 20+ minute monster.

First of many memorable shows in Fayetteville and NW Arkansas. this JS from the second set came from one of McL’s early stew compilations. I’ve never seen the rest circulate. No matter, this was the one that hooked me. 17 years later, no regrets.

This was the first UM show I traveled out of state for, and while not the best show I saw that year by any means, a solid one. Good jams in August, Plunger, Robot World, DBK, and Wappy, one of the earliest versions of 1348 to have improv, a rare Keefer, one of only two times they played You Know What I Mean, and the debut of Conduit. Listening back Bayliss’ vocals sound like dog shit though.

^^^ This wouldve been a hometown show for me. Just a few months before I was introduced to UM. Have listened a few times. Definitely a solid show. I would give anything for that encore. Agree on the Bayliss vocals

I didn’t realize that was from this show. I made a cd of early UM goodness for my car that included this jam. I absolutely burned a hole in that cd.

Nah dawg. The hole was already there. CDs used to come that way

Damn. I wish I didn’t throw out all my cds now.

Forgot to post this the other day. Was waiting around for the date to drop too. Dammit. One of the all-time greats right here folks:

Good god, can’t believe it’s been 10 years since this. I Am Trying to Break Your Heart won a fan poll for V-day cover and the debut of Booth Love. Did 2/11-2/13/10 on a road trip with an old college buddy. Then continued on and added this one solo. Think I drove 4 hours after the show then went to work the next day. These days over an hour drive requires a hotel room and PTO day.

[1] with Kula jam
[2] with Karl Engelmann on kazoo

This show has been pretty far. Just started the Phils (21 minutes!!) 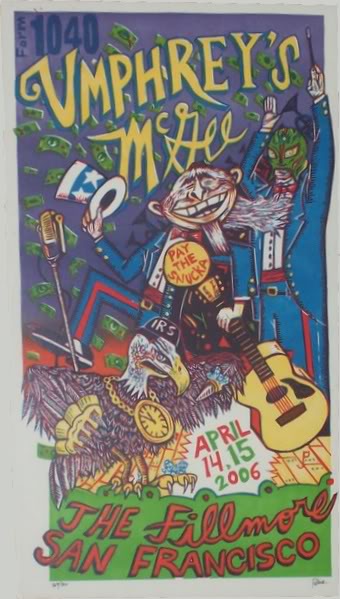