I’ve really been digging these guys lately. Caught them in Columbus in early December and thought they put on a hell of a show (had only seen them once or twice before, several years back at Scamp while heavily under the influence). Looking forward to giving their New Years run a listen. 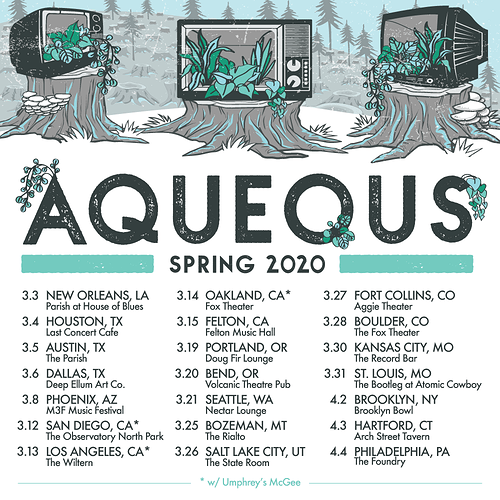 kind of a bummer the boulder show conflicts with White Denim and Chris Forsyth at the bluebird in denver.

looks like it will be FTC AQ > denver WD for me

Never listened to aqueous but I love that artwork. Any suggestions where to start?

Hopefully they add some more dates or at least hit Milwaukee in the fall this year.

Haven’t been into them as much lately, but there have some really good jams spread across the last couple of months. The 12/30 The Median is so damn good. Be the Same has been delivering as well

They haven’t done it for me since 2017. They still have a special place in my heart, and I’ll still go out of my way to see them, but I feel like it’s kinda stale. Maybe I’m just jaded. Not huge on any of their newer material and sick of hearing all their older stuff.

Huh. I guess I understand how all you cranky UM fans feel.

And their track times are so deceiving because of most their compositions are so long with a bunch of sections. Take All In for instance, one might see a 18 min version and think it will contain a lengthy jam. Not the case. It has to be 20+ at least to get anywhere.
It would be like all UM tunes being like DBK, 2x2, or N2F and minimal improv. Long track times, but not necessarily good/extended improv.

I’ve always preferred their songs to their jams personally. So I prefer their more recent shows to 2017-2018.

Been listening to some of their recent stuff. Their shows aren’t laced with a bunch of 20+ l min jams anymore, but wow. I really think they have tweaked a bunch of originals for the better. But damn I miss those 2017 30 min All Ins.

I really think they have tweaked a bunch of originals for the better.

Couldn’t agree more. There were some original songs that I really liked, but used to have little parts that annoyed me. The one that comes to mind is how Mike used to play the vocal melody on guitar while singing the verses of Skyway. The new way they play that song is a massive improvement.

Also, the 2019-11-22 version of Mind Games is a nice new take on the song. Haven’t listen to enough recent AQ to know if that’s how they are always playing it, or if that’s a one-off version.

How was the stream? Missed my alarm

thought the stream was really fucking good, the improv was flowing well

I love the new mix they have on their live recordings. Drums are big af.

Their hour long Weight of the World last night was really enjoyable!