Well that was a lot of fun. So glad they still play there, they played exactly what I needed to hear. Fun 40th!

Oh yeah, and the 2nd jam in Ringo towards the end definitely had a full on Mrs Robinson’s Strut jam in it. 2nd HBB slot got a Domino Theory jam.

Really dig the look of both of those sets. I’m pretty tired of CW and CWII, though, especially to end S2. But could be redeemed depending on the quality of improv, if any.

I like the looks of that Similar Skin, Morning Song, Remind Me to close out S1

Looks decent on paper, definitely would’ve left during that encore though.

Kashmir is great. My most seen cover but I’d gladly take more of them.

Only listened to Plunger and SS so far but wow. So far on par with last year’s Penn’s Peak show, great jamming. Both jams were unique.

Anyone know what time New Deal went on?

Looks decent on paper, definitely would’ve left during that encore though.

I thought I was the only one who felt this way about this song. There are so many better LZ tunes to cover.

I’ve seen them cover that plenty of times and it’s always a let down. I’m also not a fan of zeppelin either.

No one knows when the opener when on lol? Help a brotha out!

Any more thoughts? This show looks amazing, feel like I’ve been saying that a lot lately though. Considering that almost none of these songs are set-eaters in the vein of DBK or Divisions you’d think there’d be tons of room for improv.

Not a fan of Kashmir, would’ve def been heading for the exit. I’d take a Song Remains… any day over that, or really any other Zep cover.

Show is good. Not as good as it looks on paper. Plunger and Remind Me are great imo. Everything else is pretty average. First set is better than the second. Agree with RBB on being tired of the CWs. Way overplayed nowadays. NN is always good but other than that the second set is pretty boring. I like Kashmir but that was a pretty uninspired cover imo…they didn’t really do it any justice.

That’s my first impression at least.

That Plunger is real good. Sorta skimmed the rest and nothing really caught my attention. 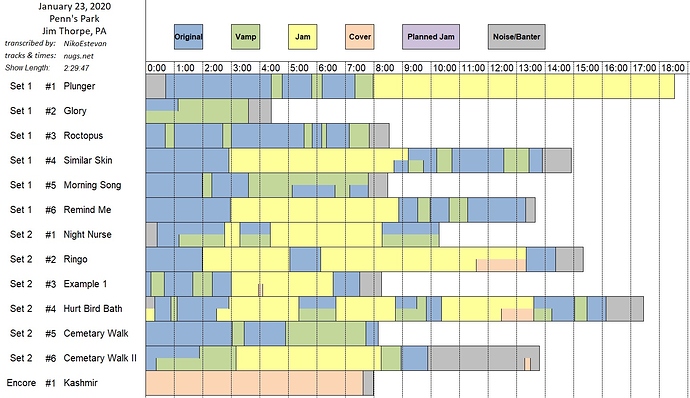 That’s not a cover in the end of the 2nd ringo Ringo jam, that’s a repeat stew “Mrs. Robinson’s Strut”

It’s technically it’s own song on ATU so i feel it deserves a “Cover” slot. Do you believe it should be “Planned Jam” or just “Jam”?

I don’t think you can “cover” your own song though…

I would say half jam, half “original” for the Mrs. Robinson’s Strut.

Similarly in HBB, I don’t think the Domino jam should be a “cover jam” but an “original jam”