What songs are you currently running away from?

I’d probably say 9.4.09 Mishawappy is the GOAT. Still salty I got arrested the weekend before and couldn’t make the drive out. Seeing Umphreys at the Mish would have been so amazing.

They could totally play that venue now a days. They should trade the yearly aspen run for a mish run. Although it might not work out with their yearly red rocks run, which I would also trade for a mish run

I mean they could honestly hit Colorado in June and September doing Dillon x 2 and Mish x 2 and sellout all four shows. Colorado still loves Umphreys even if Red Rocks seemed lighter than years past. They got 3500 to hit Dillon on Thursday night so doing Friday and Saturday for those venues would be the move. I’ve seen Mike Gordon, Lotus, and the Biscuits at the Mish…definitely up there with one of my favorite venues.

When one of my friends worked at the Mish, he would often say that they booked acts as they were either on their way up or on their way down. Has UM’s Popularity Declined?

I wish. I believe Joel said they were never going back though 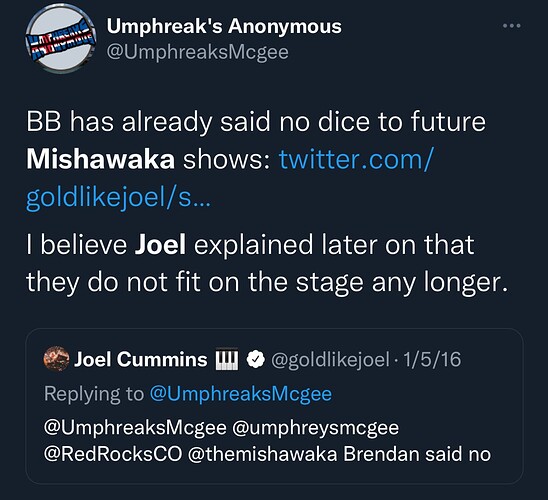 Oh @Zencer has some snark!

I have been a little fiesty the last day or so

I tripped my ass off on 2g of Enigma on the 4th, best mushroom experience I’ve ever had, been feeling really good

I know some of the members have grown into dad bods, but jeez