Let’s face it, Myers is probably the best musician in the band. This thread is all about him…

I am beyond thrilled to see the news about lessons (and “hangs”, if you’re into that)… 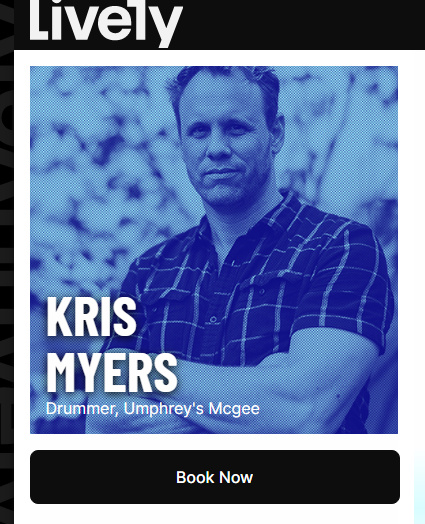 I’m always surprised when he’s wearing anything heavier than a tank top. Dude just crushes it, I’d be sweating my ass off.

RC: watches Kris the most of any band member during the show.

No way I can claim this, but I have focused on him more than I did in my earlier years of seeing UM.

He likes putting things in his face, is a pro at prowling the fanbase, and has a wicked mole/birthmark on this back. Not much not to like.

rode the tram at the denver airport with him on new years day this year. he wears really nice shoes on travel days

I’d say it’s a tie between Jake and Kris for most talented member on a technical level.

yeah, agreed. i give the edge to Myers only because he’s almost constantly improvising over the “written” drum charts on every song. i don’t know that he could play a song note-for-note the same way twice if he tried.

Kris always blows my mind during the instrumental section at the end of 2nd Self.

Jake is also more prolific as a song writer and can play numerous instruments. Myers gets the edge with a better voice though I’d say.

On the other side of the coin, I think Myers devotes all of his energy to just drums. I don’t think he really dabbles with any other instruments does he?

Am I missing something here? Is this a trick for counting that section?

i think he does actually. i know he’s interested in scoring video/film, but don’t know too much about the specifics. i would assume that means more than just drums and percussion, but not sure.

Checks out. Too damn funny.

Yes, IIRC he told the story about how they taught him that part of the song in response to a question at an S2 show about why they stopped saying “lick balls” in Prowler.

I like how Bayliss always laughs when the crowd shouts Lick Balls during Prowler, and how confused the noobs are.

I still scream it every time when they play it, my “wife” always finds it amusing since I’m usually the only one that screams it like I’m a 15 year old girl the first time seeing the Beatles.

I’ve heard some wild shit about this dude as well all along these lines.