Spoke with a guy last night that works for red rocks and he confirmed UM will again be playing 3 nights in June. He wouldn’t give me the exact dates though. Another thing he told me that was interesting was that they typically average about 6k tickets sold per night and are in danger of having to go down to two nights or even just a single night if they don’t get better turn out much like STS9 has had to do.

I am hoping for an update on this announcement during this run. I have a wedding I am attending the weekend they held the shows last year, so I am hoping for a change. However, I am not holding my breathe though, because that is a good weekend for them I am sure.

As noted previously, that is not accurate. UM averages more than 6,000 tickets per Red Rocks show played.

And I’m sure you will deny that they only sold 60% of the tickets to night one at the Fillmore too.

Filmore seemed pretty full Friday honestly. Not selling it out, but definitely selling a good amount of tickets each night.

And I’m sure you will deny that they only sold 60% of the tickets to night one at the Fillmore too.

I never misrepresent the official ticket counts. Once they are sent to me I can respond accordingly. I simply was pointing out that there were more than 6,000 tickets sold for each of the three nights of Red Rocks this past year, with the last night being close to a sell out. (The storm on the first night did not help walk-up sales.) 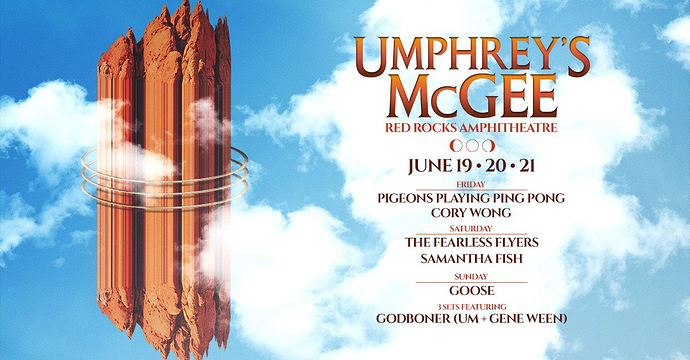 Hell yes for Goose and Godboner, and another three setter. Wonder if the Sunday three setter has become the RR norm moving forward.

UMvip package says unreleased for the Saturday day set, is that usually the case stated or does that mean this won’t end up on nugs?

Sounds like to me that they won’t put it on nugs. Lately they have always been putting VIP sets up.

man i’m whiffing it on 3-day presales. site was very slow to load and now getting the “not enough tickets available”

@jwelsh8 will AXS be offering a 3-day? Trying to decide if I should be grabbing individual nights off this presale

Got the presales! I lucked out as some friends said they were sold out when they refreshed right at 10am. Will be my first time on the rocks since that glorious 2016 run. Can’t wait!

how fucking cool is it that tickets for this run are like $15 per set (avg). pretty great value for what has been a good quality run in recent years imo.