I realize where im at. 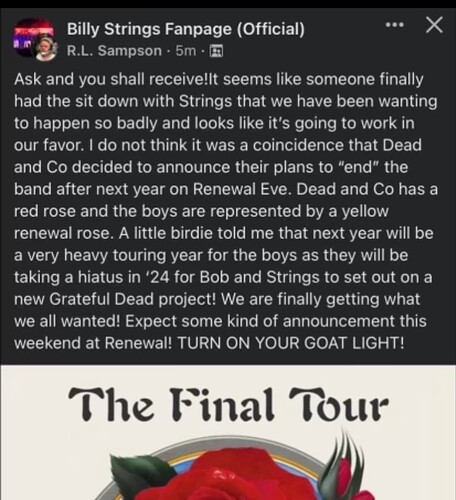 I’ll take the moneyline on that being absolute bullshit

I would rather punch myself in the balls repeatedly than run an (official) hamband Facebook fan group.

Not that there’s anything wrong…

The shit about the hurricane is ridiculous. So much more to worry about other than a show.

This is profoundly deep.

Even worse; it’s “The Church of Jake Cinninger” group

This is profoundly Deep(er).

This is profoundly Deep(er).

I don’t get how people post this utter nonsense.

That probably took 4 hours for that person to do, and it’s probably the greatest thing they’ve done.

Not everyone is a Slacker. They just come up with it All in Time. Maybe Someday while they’re In the Kitchen cooking up some Soul Food. For them, it’s Nothing Too Fancy. Of course, it may come out like a bunch of JaJunk, but sometimes you need to just take the Plunge(r).

Wrapped In The Round Umphrey's Discussion

Running an internet stream should be Nothing Too Fancy. It was UM’s regular Nipple Trix to not give a Bad Friday for this Slacker and his Partyin’ Peeps - every jam then had Room to Breathe. But Saturday was The Crooked One. Comcast was Out of Order. Maybe some Prowler Cut the Cable? V4J’ers probably went as far as to Believe The Lie (Cummins Lies), but I thought Deeper. Maybe this is just an Educated Guess, but it shouldn’t take a Professor Wormbog to Make It Right and fix the Loose Ends. Dear …