Set 1: Nothing Too Fancy > The Linear > I Don’t Know What I Want, Miss Tinkle’s Overture, Push the Pig > Out of Order, Wizard Burial Ground

Encore: Much Obliged > In the Kitchen

Why is this show not on Nugs yet? I need to confirm song times so we can really tell if this was “woof”!

I was really hoping for a thin air in Iceland. Always seem to miss it by a show or two 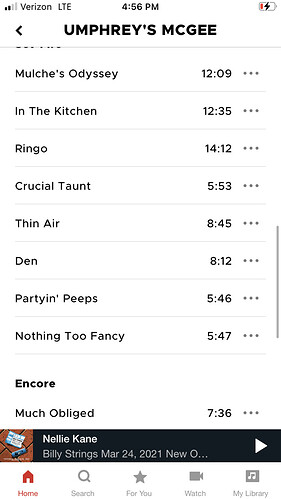 I was hoping the Much Obliged would have been stretched a bit longer but I forgot who called me out when I was talking about wanting to see a good MO since they haven’t had a GOAT since like 2015. I could go for some 10/10/09 Peoria MO vibes again. Might be my favorite jam I wasn’t in attendance for. Anyway, I’ll spin this show at work later tonight.

Yeah it’s a criminally underplayed and under hammed song. You surely aren’t getting a noteworthy version in the encore spot. I haven’t seen a good much obliged since 2014 Wilmington

Once they started Peeps, I gave up and left

The biggest woof parts are the 5:47 N2F reprise which probably has 3 minutes of crowd noise at the end of it so it’s a nothing reprise, and then 7:36 MO. They really did just give up

Too many sweet peaks I guess, eh @ryanstasik?

Maybe they were upset notre dame blew that game and took it out on all the lovely people who showed up. Although they should be used to notre dame choking by now

Oh my we have a drum solo for 2 mins at the end of kitchen also. Keeps getting better and better

You know when Jake gives up, he just starts playing random covers. Last night was La Grange sprinkled somewhere in the second set (which was actually kind of fun). The last time they were in Aspen he pulled out this horrible version of Can’t You See during Reso. I don’t know how many times I’ve seen a Dr. Feelgood tease

This was easily the worst show of the run. Thankfully the first two nights were considerably above average. Best thing last night had was some solid song choices in N2F, OoO, Wizard, Thin Air. Overall pretty damn satisfied with the three night

That was during Ringo and I agree that it was the only somewhat interesting part of the evening. Jake was really overpowering everyone most of the night and not with anything interesting. It was a fun show because of the stage antics, but quite musically boring. I would put Saturday first, Friday second and Sunday last

Member when “never miss a Sunday show” meant something. I member

Was that ever an UM thing? They’re pretty consistently worse the later it gets in a run IME

Was that ever an UM thing? They’re pretty consistently worse the later it gets in a run IME

great question. i thought the UM equivalent was always “never miss a tuesday show in the middle of nowhere”