I: Go to Hell, Slacker, Roulette, Push the Pig, In the Kitchen, End of the Road, Believe the Lie 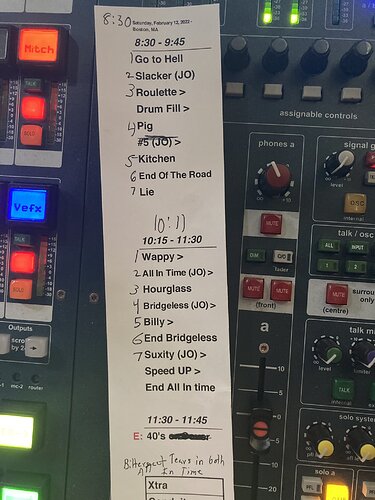 Can’t always rely on Twitter times but looks like Slacker may have been 16-17 minutes? Hope that’s the case

Anything noteworthy from this set?

What an awkward > into Billy

Aside from Suxity & Hourglass that setlist is oldschoolAF. Roulette, EOTR, Hourglass all surprising bustouts for a Saturday night. Definitely like the looks of that 1st set.

Hurts to miss these shows, couldn’t make it down for a variety of stupid reasons and they’re probably the 1st Boston shows I’ve missed in 10 years.

Kitchen was the set winner, slacker decent, and a good BTL. Solid S1

That second set is pretty infuriating. Huge potential for a Saturday night heater if they cut 2-3 songs.

Look on the bright side hodor, any improv can make a sandwich

Were there any mags sightings this weekend? Any cruises in a limo?? Perhaps he showed someone around the kink community with which he is so familiar???

This show is fine. I might have enjoyed it slightly less than N1, but only slightly. Kitchen is jam of the night and better than anything they did N1. Good to see a really fiery dance version with lots of different themes and ideas.

2nd set isn’t as bad as it looks on paper - they make the most of the short run times in Bridge and Wappy. “Hot Joel” chants coming in at a completely random time during the Bridgeless jam is a pretty cringe moment though (but obviously not the band’s fault.)

I want to KMS after hearing the same girl yell “hot Joel” a million times for two or three shows in a row now.

I tried to listen to one of these shows and stopped because of that. It triggers my “screaming bitch from 11/16/06” anxiety