Great show. The first set was honestly one of the best sets of UM I’ve seen in recent memory. It made the second set feel deflating by comparison, but the second set definitely had its moments as well.

We’ve talked a lot about “good Jake” and “bad Jake” lately. “Good Jake” was all over the entire first set, which I’ll get to. “Bad Jake” came out in force in the second set, forcing Stranglehold and Eminence Front into jams, rushing HBB, etc. WWS and Conduit were pretty interesting though. WWS went into the usual groove it goes into, then Jake and Kris sped up, and then out of nowhere it went into a type 2 funk jam very unusual for the song. This → ed nicely into Slacker. Conduit had a nice above average D&B groove going before it got Eminence Front’ed, although that didn’t feel terribly out of place. The CW2 encore was also above average - Joel’s main keyboard line was great there. And though I couldn’t really hear him, Baylss stayed on keyboard for a solid 3 or 4 minutes into the jam, so I noted it

But now the first set, oh man. When they come out of the gates with a fierce Jake bounceback jam in Milk, you know things are going to be great. While that jam was solid, things kicked up a notch with Sociable which was a very enjoyable Stasik-led bass groove. They were so locked in they didn’t really know how to end it, but it continued the high energy start. Seasons kicked things up yet again with a somewhat composed Jake-led uplifting jam. Jake just kept building and building the main riff every time they came back to it with intense results. Bayliss’ counterpoints the second half of the jam were also very on point, and the drop back into Seasons was perfect. And then finally a great dance party Tinkle’s that actually goes off completely into the stratosphere without aborting itself after 4 minutes. Great patience here too, and check out the very end of the composed part of the song for some fun Bayliss/Jake dueling. Between all of this and Passing getting played (only my 2nd in 98 shows), I didn’t even mind Suxity showing up when it did

The > into Fussy Dutchman is debatable, but the intent was there; it may merit a relisten. But this first set in particular is really worth diving into everything. Hope you all enjoy it and they keep it up tomorrow.

In another thread I was saying how I leave after the first note of the encore almost every time. This would not have been one of those times!

Didn’t go, but my buddy sent me the set list: 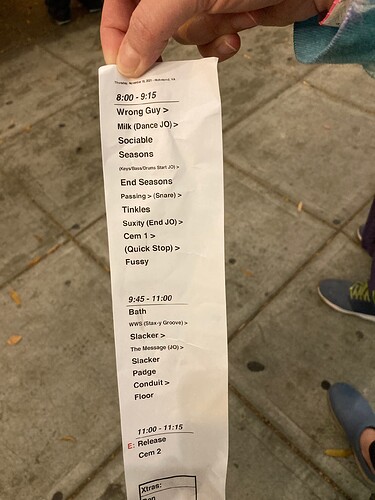 Moving cem walk to the 2nd set and cutting that padgetts is unfortunate. Hopefully y’all get that one tonight

That was my second Release and have not seen enough shows to have 2 of them. But they crush that cover/PJ so hard

For real? Milk>Jimmy both with improv is garbage? Passing>(seemingly solid)Tinkles. Seasons has produced some decent improv and Fussy is one of their best standard tunes. The only bad part about this set (on paper) is the no jam Suxity.

Edit: With that said, the Jimmy wooing is the WORST!

Watching that set list come through on Twitter, yeah, it looked like hot garbage. Milk, Seasons, and CW can’t be counted on to have improv, Suxity sux. Soc and Tinkles are the only reliable tunes in there

And we all know an Umphrey’s > doesn’t mean shit. Usually just means they held a note while everyone tuned their guitars before starting the next song.

But I’m happy it was good! I’m going to listen to it!

Good point. I’m basing it off of Milk having improv and Tinkles being good. If Milk had no improv, this set would look the complete opposite to me. It’s that big of a wildcard for them. And, yes, Suxity does indeed suck!

Really like this show, way better than both Caverns nights IMO (only other shows I’ve seen this year). First set was an absolute blast up until Suxity. MTO dance party was the most energy in the building all night. Tons of fun.

Nothing really standout in set 2 but probably the best encore I’ve seen from them. Would give this show a B/B- and I have nothing but good things to say about the national.

The National has the best balcony sightline I’ve ever experienced. Combine that with super friendly/efficient staff, even when adding the vaccine step last night…real great experience all around.

God damn this Tinkles is next level. 2011 esque jam as far as the consistent intensity goes.

This Seasons jam is so lovely.

I’m nursing beers and running on fumes haha. But it might get wacky in the venue

Love seeing Season get the treatment

S1 is pretty great. Seasons jam isn’t great, but I enjoyed the Milk > Socialable. Great 1, 2 punch to start. Tinkle’s is the centerpiece of the show. Definitely does not disappoint. Love it.

I’m a sucker for jams that start with a really great drums and bass section to kick things off. Really enjoyed that when listening to the first set today.