Proverbial wild card is suuuuch a massive tease. I mean, at least it’s something.

Overall that set is very rawk but I love Puppet, 2x2, Educated Guess, and Fir so it looks pretty appealing. Plus twitter time between Puppet and Educated Guess is like 16 mins…

Man they are playing the fuck out of Suxity,

Yeah, kinda generic blues shuffle jamming though. Hoping to see it go to more unique places soon. Interesting to see it as a sandwich in Dump. Tempo-wise, it would make much more sense to play Suxity s into the beginning of Dump.

Fun show with good energy but of course after a show with an awesome setlist, the following show has an awesomely awful setlist.

Dear god what horrible song selections. Still had fun tho.

The thing is the Pittsburgh show is pretty pedestrian and light on improv, this looks like it may have a bit more jamz

Streamed set 2 from mixlr and it was good. Supposedly set 1 was even better so it looks like a good show.

Last night may have had a unique setlist but seems to be a pretty meh show overall despite a good Blecho and the Red Room debut.

How was ABITW? Feel like the last handful of times it’s been played it’s had a really great jam.

It was alright, nothing really that I would write home about. Puppet was probably the best jam of the night. Dump got weird in a really good way. Kitchen was dancey and fun per usual.

Also, let’s all keep in mind that my first initial opinions are always certifiably terrible. So, itll be interesting to listen back. Energy was definitely there

Hindsight and Looks in the same set is a nightmare.

Also thought it was strange that they walked out to Gurgle the last time they played Express Live in ‘18 as well. I’m usually not good at calling setlist writers, but I feel like this one was Jake

Looks like Puppet in total is just shy of the 20 minute mark. That is awesome for a song that I feel has mostly gotten the shaft on improv in the last few years. 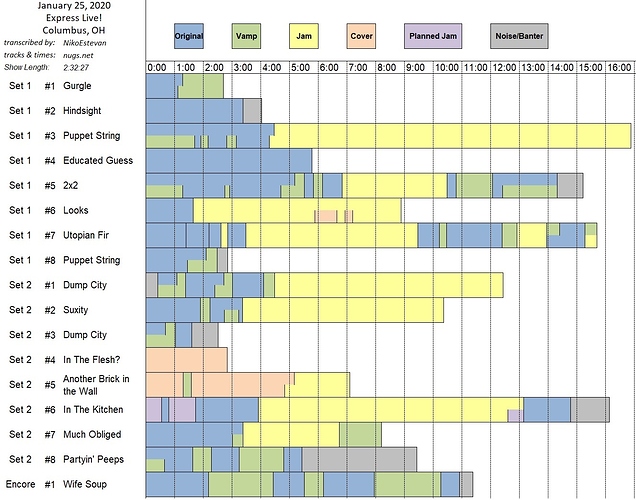 For more information on this guide, to discuss its accuracy, or to make your own guide, check out this topic: Umphreys Live Listening Guide - A Community Project