A thread to talk about random music.

Today I read an article about The Airborne Toxic Event. I had never heard of them before. Anyone listen to these guys? I threw on two of their songs, Come On Out and Sometime Around Midnight.

Picking up some LCD similarities in those two songs. Kinda dig them. Anyone listen to them? Hate them? Like them?

I’m fully disconnected from the music scene lately. For all I know these guys could be universally hated.

My ‘wife’ was super into them when I met her. Took her to a show and enjoyed it

Nice. Again, I’m pretty disconnected from music outside of my comfort-zone, but I enjoyed the few songs I listened to.

Is there a Mac Miller thread? If not, there should be. Circles is my AOTY. Give it a spin if you haven’t ventured into his world yet. Swimming which came out right before he OD’d and Circles are some really cohesive LPs.

Any Scary Pockets fans out there? I love their funk arrangements of pop tunes (not necessarily “pop”, just well known covers). It’s usually a different singer for each song, sometimes they have the same singer back for one or 2 more. I think it’s really subjective- if you just play a playlist of theirs you’ll probably find ones you like and ones you don’t. Because of that I’m not even going to post a link. Just youtube them and find a song you like and see what they do with it.

I’d recommend Pumped Up Kicks, Dreams (horn arrangement is bangin’), Toxic, Crazy, and I Want it That Way…because you’ll hate me later when it’s stuck in your head. 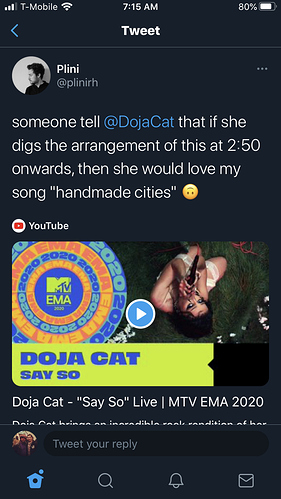 Not sure where to post this, but holy shit is that a straight rip of Handmade Cities, especially the melody at the end. Where my Djent bois at to confirm? @opsopcopolis

Total straight rip off. Now I gotta go listen to some Plini

Now I gotta go listen to some Doja Cat

isn’t she tight with nazi’s?

I think she got naked for them. Bro, she gets naked for everyone.

This music video is ridiculous though. Never seen it till now. Wtf is going on?

her shit is catchy as hell i just never heard any conclusion to that drama. going to watch this video just to see if tia and tamera mowry show up.

everyone? need to find where doja cat lives.