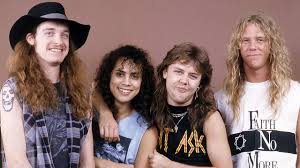 I’d say my favorite album is probably Ride the Lighting. hard to say, their first 3 are brilliant and The Black Album is a classic.

Been listening to a lot lately. Caught a few of the Metallica Monday streams as well. Tonights is looking great.

Really wish S&M2 would get released or at least an update on it. Was originally set for February

For real. Would love an update on S&M2.

Always has and always will be one of my favorite bands of all time. Just a larger than life band

My buddy who preordered said he received an email that said “springish” but it also said “try our best” and “unforeseen circumstances” a lot so I wouldn’t lock that in.

Damn i didnt even know you ever could preorder it. Do you happen to know where/when he preordered?

I never saw a pre-order for it!

Looks like August according to Lars before the stream tonight

a few thoughts on the stream tonight…

Newstead was a better bass player

100% agreed with everything except this. Roberts fucking incredible and can blow Jason away with both just his fingers or a pick. Jason by far had more charisma and stage presence though. I dream of being able to see Metallica live with Jason still in the band. Some of his vocal additions to the live show were just fucking legendary

** not a pre-order. He won a contest back when the movie was in theaters for one of the first batches of releases.

Whoever is picking out the Metallica shows is doing an A+ job.

Looking forward to this one. Pretty sure most of this show is on youtube already but missing a lot of the audio

Now hurry up and announce the UHD/Blu-Ray packages

eta: just read that the full box set and all that is getting announced tomorrow as well. Noice.

I love Metallica but holy shit are they full of themselves. They’re doing a special concert filmed exclusively for Drive-in Theaters, it’s only $115 per car. Plus this is being put sold through ticketmaster, so I’d imagine another $30 in fees on top of that. Stupid expensive.

Another $30 at least, after taxes and fees I would expect that to creep up towards $200.

I was gonna say something about the cost of Billy String’s drive in show and then I realized that is a live performance by Billy himself. $115 per car for essentially a movie is pretty damn bonkers.

For a filmed event, yeah its nuts. I was stoked to see a showing within 20mins driving distance but no way can i justify that cost. Absolutely love metallica and spend ridiculous amounts of money when they come to town but this is insane

I would definitely do it if I had a few people to go with. Don’t want to pay that solo plus I’ve already pre-ordered S&M2 so the download codes aren’t of any value to me. Seems a lot of the drive ins (especially for bigger bands) are priced more but aimed for multiple people in each car.

Also, I bet the majority of these sell out even at that price.

All I know is I’m in Virginia and can see KB’s hard-on from thinking about how UM can do this.