Encore: The Weight Around > All In Time

3x was kind of a dud but I really enjoyed the rest of the show. Great little uplifting jam in 2x2. Silent type was ok, enjoyable Day Nurse with Ernie, fun jam in August and a slinky bluesy Utopian. Encore was excellent

There were a few teases around. Rhiannon in the intro to something first set, Hindsight tease from BB in Prowler followed by a (I think) Thunderstruck tease by Jake. Breathe jam in AIT and some Dick Dale tagged onto the end of Utopian.

Rhiannon teases were in triple wide.

Thought the short, but sweet, August was JOTS. But overall a pretty enjoyable show start to finish.

What a waste of an Ike Willis sit-in. The guy was Zappa’s lead singer and guitarist for 10 years. They should have let him at least sing the entire City of Tiny Lites section of Life During Exodus.

Marcus is in Ike’s new Zappa tribute band, the Brothers of Invention, who happened to be playing in Seattle on Sat. So I’m guessing this was a last minute decision… like Marcus brought Ike to the show, they said hello to the band backstage, and were invited on. I would have loved to hear them do Joe’s Garage or another classic Ike-fronted FZ song, but I’m assuming they didn’t have the time to prepare for that.

They should have let him at least sing the entire City of Tiny Lites section of Life During Exodus.

I love me some Kris Myers, but I have to agree with this. It was weird to hear him singing it with the OG standing right there on-stage.

Thought the short, but sweet, August was JOTS

Agree with this. Not a great show imo, but the August is beautiful. And the encore hits me in all the feels

Love that they are playing the the weight around more recently. One of my absolute favs. Took me like 50 some shows to see it and then they play it twice in NC in pretty quick succession. 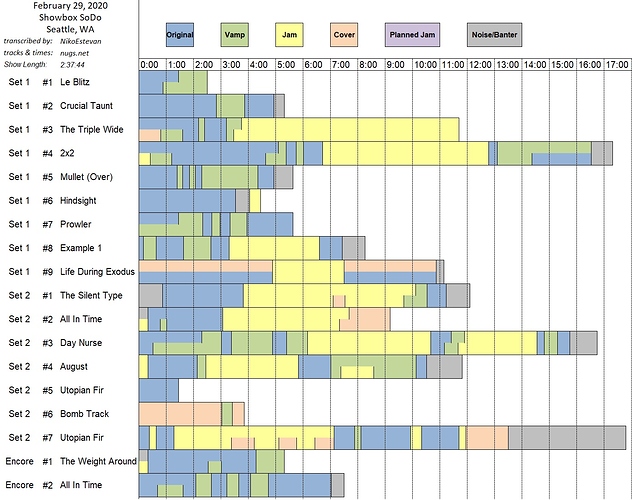 For more information on this guide, to discuss its accuracy, or to make your own guide, check out this topic: Umphreys Live Listening Guide - A Community Project

As others have noted this was an crazy tease/cover heavy show. Here’s what I picked up on as well as others whom I agree with (thanks guys, some of this I definitely wouldn’t have picked up on):

I personally loved the 2x2 in this show…thought it was the perfect length, had amazing peaks, etc. Would have liked for the August to have gone on longer, but I’m pretty sure I feel that way about most August jams. As for the Triple, I really liked it as well but it kinda seemed to fizzle out by the end.

That 2x2 kinda had a U2 theme going, especially the delayed guitar tone.

I feel like this August reminded me of the one from Red Rocks 2017 sans the lyrical. Could be wrong on that though

I am not hearing the “Synchronicity II.”

There is, though, a “Use Me” jam in All In Time and “Working Day and Night” jam in Day Nurse.

I am not hearing the “Synchronicity II.”

just listened again and i think you’re right. it was just a few measures of guitar strumming that sounded like a tease, but probably isn’t.

Kind of sounds like “Let Me Blow Ya Mind” in Utopian Fir.